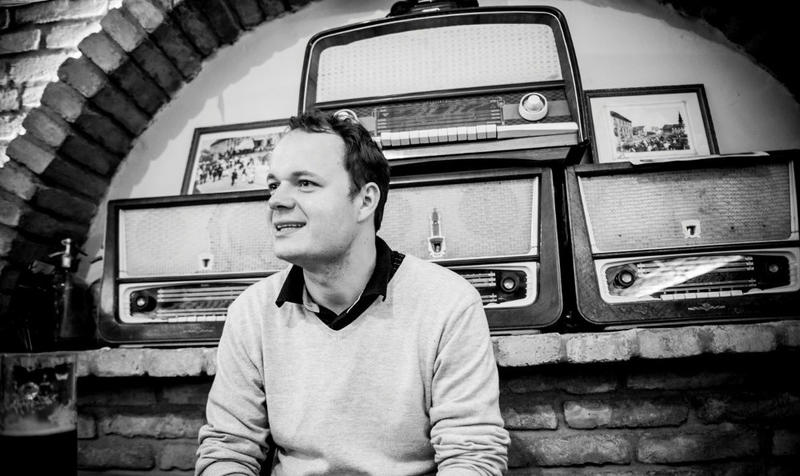 Gerszewski’s compositions are based on Robert Lax’s poem “the hill.”

The concert at the Budapest Architecture Center will feature Orsolya Anna Juhász (soprano voice) and Bálint Baráth (piano). It will be broadcast live on the group’s YouTube channel, where you can watch it later too: https://www.youtube.com/user/fugabudapest/videos

Before the concert, György Bartók and Nikolaus Gerszewski will talk about the works.

For more specifics about the concert and FUGA, go to: http://fuga.org.hu/fevent/ter-zene-sorozat-2/

Here’s what Gerszewski says about his compositions:

I chose the lyrics from the volume “the hill” by the minimalist poet Robert Lax, who has lived half of his life as a hermit on the greek island Patmos. His poetic style transcends literary genres, sometimes oscillates between narrative prose and abstract lyricism, even touches the border of concrete poetry; the single word can be emphasized in its phonetic objectivity but is at the same time embedded in a descriptive context.

The music I wrote is sometimes chromatic, sometimes appearently modal, yet not following any musical system in its tonal shaping. The compositional technique is actually rather conceptual, in the sense of using a selfmade precompositional setup to reduce the possibilities of choices. Yet the music itself is very intuitional, which is not a contradiction. We have this relation of a conceptual approach with an intuitional, so to speak lyrical result in the works of many great artists of the conceptual period, like Ad Reinhard, Sol Lewitt, Agnes Martin, Dan Flavin or Eva Hesse.

As regards content, these songs are all about solitude; a man living in a  world of his own creation, waiting for a companion who may never come.

And here’s Newman talking about her composition:

I think that art is definitely trying to get away from personal feelings that we all feel – this way or that way. Art has the ability to embody, make concrete & transcend, help us ‘get through’ those feelings. Not therapeutic, but transcendent.

When writing music I don’t use pitches or rhythms, I use musical material as a job-lot, not its components & really like a job-lot I take what it gives me. I apply ‘things’ to the job-lot of music. The vista of music, the panorama of music. I suppose what interests me is the phenomenon of music & our relationship to it, how it combines itself with us, or at least making models for this. The phenomenon of music & how it combines itself with us. I am wondering if the medium is also ‘merely’ a model for the outside world.”

Nikolaus Gerszewski was born in 1964 in Hamburg and lives now in Hamburg and Budapest. He is a trained visual artist and a self-trained composer of ‘experimental music.’

Since his early 20s, he has been engaged in non-representational art, as both a painter and a theorist. In 2005, he came in touch with Cornelius Cardew’s graphic score “Treatise,” and ever since he has developed his own musical notation, in form of graphic scores, text scores, alternative systems of signs, semi-conventional, and even fully conventional sheet music. In 2008, he introduced his own generic term ‘ordinary music’, expressing his view, that the making of sounds should be considered a natural means of expression, accessible to everyone, rather than being banished into the realms of art and entertainment; this having said he still considers himself a natural born artist.

Chris Newman was born in London 1958. While a music student at King’s College London he found himself involved in translating Russian poetry into English (with Russian poet Eugene Dubrov) & this act of translation in the broadest sense – either from one artistic medium to another (this mediums in his case embrace music, poetry, performance, painting, video & dual presentations thereof), or from the act of perception into the artistic medium – has formed the basis of his endeavors. He moved to Cologne in 1980 & has more or less lived in Germany ever since.