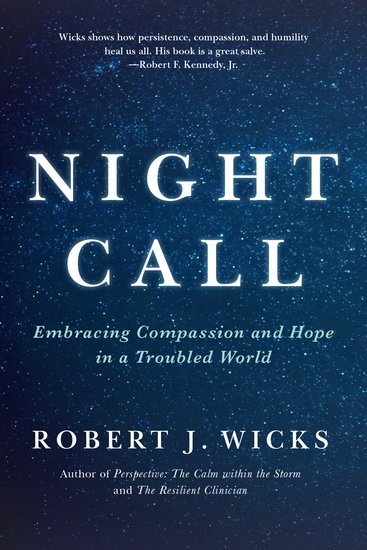 [*Note: After making this post this morning, I received a message from Robert J. Wicks offering readers of this blog 30% off on his new book.  To receive the discount, go to the Oxford University Press page for Night Call and use the promo code ASPROMP8.]

The popular writer and psychologist Robert J. Wicks, author of 50 books, has included a section on Robert Lax as a mentor in his new book Night Call: Embracing Compassion and Hope in a Troubled World.  The book just arrived in my mailbox yesterday so I haven’t had a chance to read it yet, but it looks like an important book for these unsettled days.

Wicks features Lax in a chapter called “Profile of a Future Mentor.”  He quotes several passages from my book Pure Act: The Uncommon Life of Robert Lax, first to illustrate that Lax felt mentored himself by the Indian guru he met in college, Brahmachari, and then to show how Lax, in turn, mentored others.  In addition to discussing my relationship with Lax, Wicks talks about Lax’s mentoring of Steve Georgiou, quoting from the book Georgiou wrote about their relationship, The Way of the Dreamcatcher.

Wicks concludes his section on Lax as a mentor with these words:

“Both Georgiou and McGregor were bringing their life experiences to Lax, in this case, in the hopes of making greater sense of their stories than they could on their own.  The were seeking a form of wisdom that would allow them, in turn, to continue to share with others in need–possibly on a deeper level–what they had and would learn.”

Later in the book, Wicks returns to Lax briefly, mostly to quote (again from Pure Act) a brief Lax poem that suggests the goal of self-evaluation and renewal: